In the previous post (“How we got here”) I provided a small intro into why and how my team arrived at a Branch-Per-Feature/Kanban development lifecycle.

In this post I’ll describe each stage of our current development lifecycle.

Below is a screen shot of how it looks in our TFS work item view.

Yes, we hacked and crammed our kanban into the MSF-Agile template, and although it’s rough, it’s working better than our previous non-kanban ways.

To move a feature though the kanban we select it in the “iteration path” drop down. 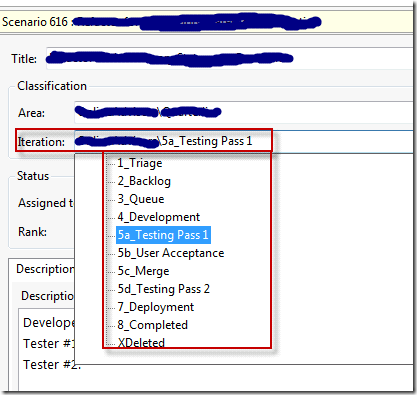 Jason.Jarrett
I don't disagree with the impression that another pass of testing once a branch has been merged could seem a little redundant. However, I think it really depends on your development shop and the context of the work being tested. We have a small shop (5 devs, 0 testers). So each pass of testing done by a different dev is a completely different set of experiences/backgrounds taking a look at a feature under test. In fact we've found the second pass of testing to be extremely valuable and cost effective (finding/fixing bugs before they get deployed).

About the automation part - we run a full automated test suite & integration tests after each check-in to the trunk. However, (in our context -- 6yr old code base - very little code coverage, etc...) automated tests are just not enough to give the confidence that every merge means everything's green.

There are many factors to take into consideration when deciding how your kanban should be setup and all the stages you will need. I'm am certainly not speaking with authority on the subject, just experience (and only a small experience at that). But one of the great parts of this process is it's ability to change when a need is discovered.
Bealer
Interesting approach. The main issue for me is the merge back into the trunk. You solve that with a 2nd round of testing.

I'm not sure if this is wasteful though. It's definitely needed to check the merge went ok, but it's a lot of inspection.

The developer inspects his code, after working on it. Then a tester inspects it. Then another round of inspection takes place after the merge.

That said, automation would solve a lot of that. The same tests could be re-run quickly (plus a bit of manual testing) to ensure everything was ok.

What we may do in fact, is just have automation tests running constantly on our trunk. Do the merge, and if nothing breaks it's ok. If there were conflicts in merging, then we may do some manually testing around that area.
Jason.Jarrett
Have you seen the kanban process template over at codeplex?

I haven't taken a thorough look at the template myself, just know it's out there...
Jason
For process template customization, there are some great tips and tricks in this blog post:

I'd really like to see someone develop a Lean/Kanban process template something like the Conchango Scrum template & share it with the community. Maybe even something that integrates with AgileZen or something similar to help visualize the Kanban. Lots of opportunities in this space!
Jason.Jarrett
@Jason As far as TFS is concerned my blog title is probably a little misleading... I will have a very TFS centric post coming with the gotcha's and others I've learned while implementing the process. We haven't gone as far as customizing the template or written any specific reports. I have a sql statement that gives a rough estimate of the time it takes for a feature to get through the pipeline, but feels more like a hack than a useful report.

The big thing lacking for us in the tool at this point is the visibility of the kanban. Given time I could probably write a report or something else to display this information, but don't feel my time would best be spent there.

If you have any good tips on how to slowly customize an existing template and morph it into something else, I would like to do things like you state in your comment "remove iterations altogether and replace...".
Jason
I like this approach. I'm curious if you've developed any reports around your new template? Have you looked into customizing your process template in such a way that you remove iterations altogether and replace with something like a "Kanban Stage" field?