This past week I received an email from Microsoft's NuGet team asking if I could look into a bit of an issue with DefinitelyTyped's NuGet package publishing.

A really long time ago, I wanted to access DefinitelyTyped packages within Visual Studio via the NuGet package manager. So I quickly wrote up a powershell script to accomplish this. This script has run almost continuously ever since, and primarily without issue.

There's been a couple tweaks/issues along the way - as to be expected, but it's been primarily hands-off.

What does the automation do?

All of the NuGet packages generated for DefinitelyTyped are run through a build process on the good servers at AppVeyor (Thanks AppVeyor).

Every 2 hours the task does some git-fu to figure out what DT packages have updated (since the last run) and publishes updated NuGet packages for each updated DT package.

First let me say that thanks to Yishai and Maarten from Microsoft who brought the issue to my attention and were extremely polite and patient with the raised issue. So thank you, thank you, thank you for the support and being so friendly while working through this... 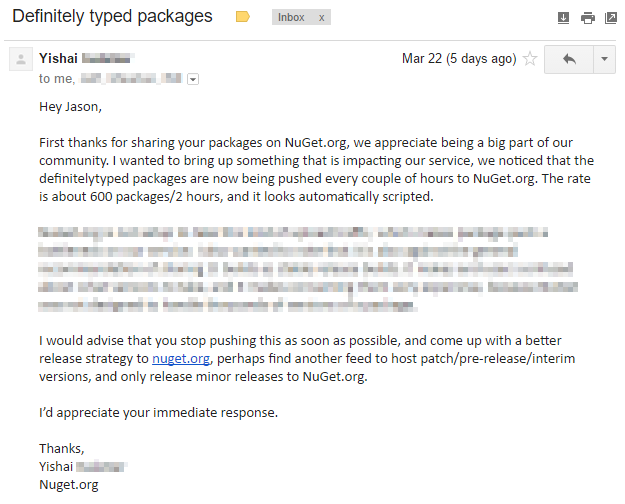 It was pretty easy to see that every 2 hours a large spike in uploads to NuGet was happening.

While I can't say for certain this incident report on the status page was due to the NuGet automation, it was around the same time the automation was pushing extra builds (and right before I was contacted by Microsoft).

Was that my automation oops?

I didn't recall getting an error email from AppVeyor so I was initially suspicious. But logging in and looking at build history: hmmm. Looking back at my email, looks like I did receive the first failed build email - but must have been busy day as I didn't happen to notice that one email (when I usually do from other projects). 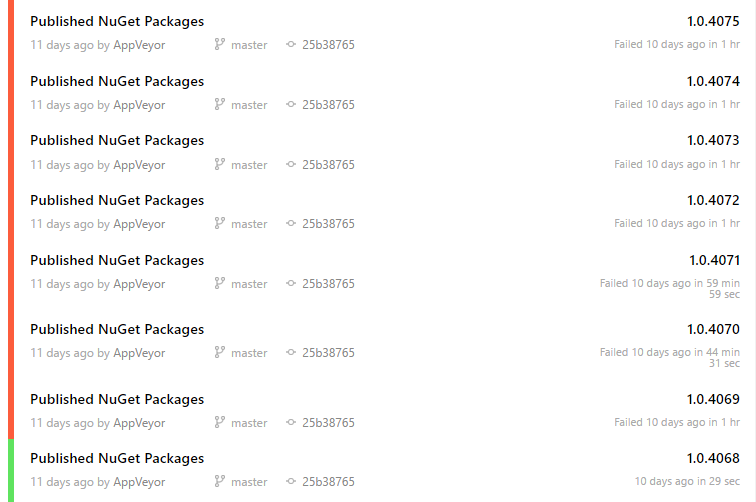 YIKES!... so I quickly responded to Microsoft saying I'd shut down the automated portion and dig into it.

Turns out the problem was due to a large pull request that updated about every package in the DT repo. This meant it had to publish every single package, but for some reason (not showing in the logs) the AppVeyor job was failing at the end and not saving the fact that the packages were being updated on NuGet...

I have a way to run the NuGet publish manually on a local machine so I pulled down the project and ran the complete build. This took quite a while (almost 3 hours) and eventually I discovered the problem.

At the end of the script is a git commit -m {msg} command. This is an important step as it records what has been updated/published. The problem was due to the large number of packages published, the {msg} was so big that it was throwing an error saying the command line command was too long to execute. Causing the system to not complete the cycle and end up re-publishing all nuget packages every 2 hours.

I was able to manually commit with a shorter message and it brought the system back to normal.

And below is NuGet status after the fix.

Turns out the NuGet team put some time into optimizing the publishing process of their service - so maybe there was a benefit to this whole fiasco, but hopefully we won't be hammering the system going forward :)

So I'd like to say thanks again to the NuGet team for your kind support email and professional way of handling the issue. This is a great example of how Microsoft is helping the OSS community and their support is really taking off and showing promise!

I installed Visual Studio 2015 the other night and was just poking around and stumbled upon the Cordova Project Template that is provided. This not necessarily that new, but is new to me as I spend most of my time these days working on a Mac doing iOS, Docker (for server-side stuff) and other projects. Though, I miss and still enjoy the benefits of Visual Studio for some projects.

While looking over the project template, I was surprised to see a familiar folder structure typings/cordova/* in the project.

Why is this folder structure familiar?

Because I created it almost 2 years ago when I threw together a PowerShell script that chucks DefinitelyTyped TypeScript definitions up onto NuGet.

Another example of the folder structure, while I can't say for certain, but I can only guess that when the winjs started converting over to TypeScript that they chose to put their type definitions into the same structure. I won't claim to have inspired it, but would be cool to say I did.

It was a bit surprising and humbling to discover Microsoft had in one of their default templates a reference to some TypeScript type definitions that (while I didn't have anything to do with the creation of the definitions, nor DefinitelyTyped) I did created the simple little utility that runs continuously up on TeamCity.CodeBetter.com and tirelessly updates NuGet packages as they change over on DefinitelyTyped.

This reminded me, that I hadn't checked up on the NuGet user account for DefinitelyTyped in quite a while so I decided to head over to the NuGet.org, take a glance at the account and check out how many downloads there had been?

This little ditty was neat to find. I haven't done a ton with TypeScript in a while, but it's quite amazing to see the traction it is starting to gain.

This means that the TeamCity over at CodeBetter has pretty much been cranking out new and updated DefinitelyTyped TypeScript definitions for almost the last two years, but it's time to re-visit...

Before all of the new, cool, and hip online continuous integration systems came to be, one of the only free options for open source was an instance of JetBrains TeamCity over at CodeBetter and I'd like to throw out a big thank you for those at CodeBetter who put the time and effort into hosting this service for many of the .Net OSS projects out there.

I recently ported this job to an AppVeyor build for the DT project and after a quick round of using their wonderful support to work through a hurdle, I completed a new build at AppVeyor that replicated the one originally hosted on the TeamCity server.

So a HUGE thanks to AppVeyor for creating such great product, and offering free builds to the OSS community.

I'll keep an eye on the new build for a while (before I forget about it) and hopefully it'll run for another long time to come.