I recently started playing with TypeScript on an asp.net MVC web application.

We're leveraging some third party js libraries and found the type definition files over at DefinitelyTyped a huge help when dealing with libraries not originally written in TypeScript.

The first thing I tried to do was add them via NuGet and when I didn’t see them up there, I strolled to the DefinitelyTyped issues list and saw an open GitHub issue requesting the functionality.

So I took on the task. Created a PowerShell script to automate publishing and synchronize changes to the DefinitelyTyped repo up to NuGet.

This morning I pulled the trigger and published 127 different NuGet packages for each DefinitelyTyped TypeScript definitions.

If you ran this in visual studio NuGet Package Manager console

You would get the following installed into your project 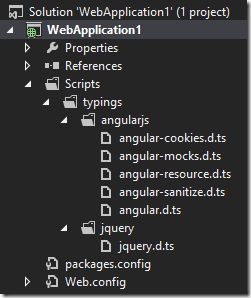 Note how we didn’t ask it to install jQuery? The powershell script leverages the reference path: