Recently I was added as a developer to the i4o codeplex project by Aaron and last night I made my first commit.

There were a few pretty big changes to the library. I'll highlight some of them below, and in a couple future posts will describe in a little more detail how you can use these features.

This was removed for two reasons.

The solution to that was to allow adding indexed properties dynamically, however you had to give it a string representing the property name, which leads into the second issue...

If you refactored a property and forgot to rename the string to match the refactor you would end up with a runtime error.

Although we haven't enhanced the Linq support for IndexableCollection (should come soon), I was able to eek some performance by doing some internal caching of property types and a few other tweaks resulting in the Index creation becoming about 30% faster...

Fluent interface for managing the Indexes

The last big change which fits in with the IndexSpecification<T> is the Fluent interface for dynamically adding/removing properties to be indexed. One short example could be: 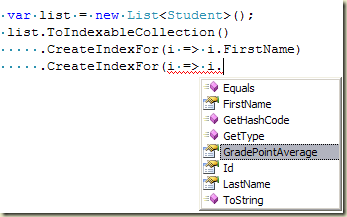