I took a stab at porting the i4o unit tests to Silverlight which was quite a bit more work than I initially expected.

After creating a Silverlight Unit Test project and linking the original test files into the Silverlight project, I compiled...


The only other issue that came up was some of the Stopwatch dependent tests happened so fast that they would fail intermittently... the quick hack/solution for this was to up the iteration count of whatever they were testing. 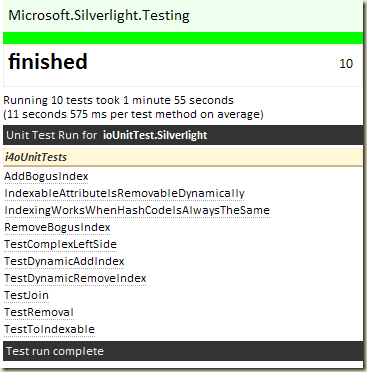 Tiaan
You might also want to look at my implementation of the Stopwatch for Silverlight, which supports resuming.
Tiaan
For the Frequency property's implementation, you probably just need to return the System.TimeSpan.TicksPerSecond value.