I had some time to play around with and learn WPF within Silverlight. It's a modest start, but I just had to blog about it...

We've started a project at my current job using Silverlight. Researching different framework options I ran across the UnitDriven project on codeplex. After downloading and checking out the silverlight testing UI...

I decided this was a place I could take a stab at learning some silverlight UI. ok... So it's getting late and it's certainly not perfect, but here's where I am now. 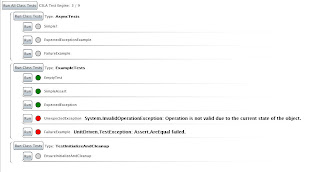 The only really tricky piece was... The original UI used nested ListBox controls which threw me down a path of thinking the program was broken... basically with a ListBox inside of a ListBox you have to select the first item, then the sub item, and in this application, only then, can you select the "Run" button to execute the unit test... I spent time looking through code trying to figure out if there was a bug in the testing contexts.

The solution to this was to convert the ListBox to an ItemsControl. Which allowed me to select multiple buttons without having to first select the ListBox sub item...

So I updated the main grid in the XAML, and shifted a few things around to allow this old feature to be seen in the new UI.
[/EDIT]

after that was done, it was basically playing around with different styling elements to end up with the UI above.

It was a good simple exploratoin into some of the Silverlight's WPF capabilities.

Nermin
Your work on this patch is trully appreciated. That listbox issue was trully annoying one.
Justin Chase
Thanks for the patch, I applied it today.